What are we about?

We are the Great Yarmouth Shukokai Karate (do) club. We don’t mention the “do” but it is there in the background influencing what we do. Translating from the Japanese  into its separate elements we get:

Turning that around we end up with a Japanese unarmed fighting style which anyone can perform should the need arise. Karate has its roots in Okinawa but as this isn’t a detailed history lesson I will just say that our style evolved in Japan under Chojiro Tani who started teaching it in 1946. He applied body mechanics to the other styles of karate he had been taught and developed his own style.

As we practice this martial art we are called “karateka”.

But what does that actually mean?

That is a question that is best answered by our self defence philosphy:

When attacked you should always move, most probably block the attack and then counter attack.

The move and block are a very basic defence mechanism. Getting hit hurts, it messes with our senses, so let’s try our best to avoid that. Not all martial arts are so concerned with avoiding the attacks relying on body hardening to absorb the blows of their opponents whilst attacking themselves.

Karate’s main offensive techniques are punches, strikes and kicks without the use of weapons as is suggested by the “empty hand”. You probably won’t have a  weapon to hand (and one you’ve trained in) when you need to defend yourself so practicing defending yourself without one seems sensible to us.

So why doesn’t karate use lots of locks (like aikido), or throws (like judo), or rapid multiple strikes (like wing chun) and so on? The simplest answer is that of specialisation. It is better to master a single technique rather than know of a hundred. With that philosophy fighting styles developed which most suited those practicing them (master and student). Karate was developed by people who enjoyed, and found the benefit of a simple style emphasising punches, strikes and kicks.

When the “art” of fighting started to be taught openly, and especially in schools in Japan, the sheer violence and damage done had to be toned down. This resulted in teaching of individual martial arts and their techniques in a certain and controlled way. This is “do” and it is very obviously incorporated in judo and aikido. It’s the way of practicing which allows you to perform your techniques with a training partner (uke) and both walk away at the end of the lesson without injury. You would struggle to master any martial art if you didn’t have anyone to train with because you had injured them all (and most people don’t like to get hurt). We have had no serious injuries at the club and we would like to keep it that way.

Having explained “karate do” what does “way for all” really mean?

We take that to mean that it is a style that anyone can successfully use. Going back to our philosophy if you are able to move you can avoid an opponent’s techniques. You don’t therefore need to be big or tough to do this style (it also doesn’t involve being repeatedly thrown into the ground like some martial arts either).

The counter attacks are simple and if you strike your opponent precisely then you don’t need to be big, strong or particularly fast. An example would be, if someone pokes you in the eye it doesn’t really matter how big the finger was, it still hurts. If you can’t be very precise with your attack (which is likely to be the case in a fight) then you can use simple body mechanics to bring the power of your whole body to bear rather than a single limb. This is something we really emphasise at the club.

So there you have it.

We practice a simple style of unarmed self defence twice a week and go home tired but without injury.

The badge was conceived and designed around the following points;

The badge format is round. Devoid of corners there is no hiding place for shadows or secrets. The circle is an unbroken line, no end. Like life, Karate training is a circle, as you learn more, there are more questions, more to understand and learn. Finally, the circle denotes sometimes that has a central core, middle, a heart, that heart is the student, because without students there is no club.

Within the centre lays a 3 frond bamboo emblem. A plant very much connected to the orient and especially Japan. Just as there are many types of bamboo there are many styles of Karate, just like different bamboo plants the different styles of Karate have fundamental similarities. Just like bamboo your Karate should be strong yet supple, resistant yet flexible. Those that do not bend, break. In Asia they use bamboo as scaffolding yet the shoots are soft enough to eat.

These 3 fronds stand for the 3 fundamental components of our Karate; Kihon (basics), Kumite (sparring) and Kata (forms). Without these 3 main components our club-training regime would have no substance or structure, no heart or spirit and no tangible link with those that went before.

Discreetly integrated within the emblem is the cross of St George, just a little reminder that we are an English club. With pride in our country we should have pride in ourselves, have respect for our karate, train hard and it will allow the true character to shine through. Hopefully that character will contain some old fundamental values of respect, courtesy, chivalry, and modesty.

Just to ensure our link with Karate’s past is not broken the Japanese symbols of Empty (Kara) Hand ( Te) touch the cross of St George. These two symbols then lead the crescent arc of the club’s name. 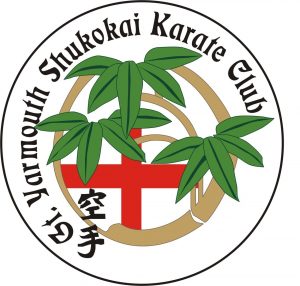