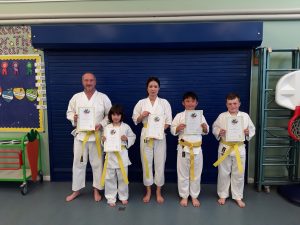 Well done, in no particular order, to YuYan, Satori, Symon, Andrei and Kody for passing their yellow belt grading. Hopefully this will be the first of many successful gradings for them.

They all tried very hard and for the most part concentrated extremely well so as to do their best. I was greatly impressed with some of the techniques on show and awarded quite a few five out of five marks. I genuinely don’t feel that some of the techniques could have been done any better than they were on the night. That showed that they were paying very careful attention in class.

Not everyone in the grading found it so easy. However, I am pleased and relieved, that with the right amount of effort on the night their positive attitude got them through.