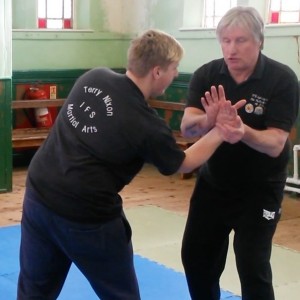 On Saturday 14 January a number of us attended a seminar put on by the local martial arts community where we were able to train with a number of Senseis in various martial arts. Between us we had hundreds of years of experience in various styles but none in MMA/cage fighting!

We trained in the following:

As many of you know we regularly have Sensei Tony Caitlyn come to the club to teach us Aikido. It is a martial art primarily using body evasion, locks and throws. There didn’t seem to be many differences between the style we are used to and this one but that is my uneducated view. I am sure their respective practioners would be able to explain it.

Some of the techniques we learned on the day were actually familiar to us and the foot movement drill that we did at the start came easily given all the complex katas that we practice.

We learned a sequence of wrist locks to give us control over an opponent and a take down using an aggressive step to the side and pressing down and pulling the opponent backwards where they are weakest. Something we have practised before.

The instructors were clear as to hand placement in sankyo, a lock we often use, so that was great.

Jeet Kun Do with Terry Nixon

This is a martial art which emphasises speed of movement in all things, be it strikes or locks. We have trained in it a few times at other seminars and is the reason “fast hand drills” is on our training rota. It’s rather fun as well as being a useful add on to our own techniques and principles (if you look at some our katas you can actually find a few fast hand sequences too).

We learned a sequence of locks and counters with your partner which went on indefinitely. That was rather novel and I shall do my best to remember it for practising at the club. Click here for a short video of the sequence demonstration.

We also learned a couple of variations on a sequence of strikes, locks and even a knee strike or three (or four).

This is a martial art based around the techniques that samurai used when fighting with their swords (katana).

This was an opportunity for us to use a bokken (a wooden sword) as there was no way any of us could be trusted with the real thing. Not something we have done much of that’s for sure!

We went through quite a few drills doing our best not to hit each other. If you looked carefully you could see a lot of Aikido in the foot movements, evasion and circular movements of the hands.

We had a chance to try some rather flamboyant moves and sequences. We practised a number of moves and techniques that we certainly wouldn’t have picked to put together.

It was certainly an experience and something to think about.

Yes, we actually did some karate taught by Sensei Ziggy. Not only that we, ‘Kept It Simple, Stupid’ and did pad work!

Whilst we may not have impressed any of the other students or instructors with our range of techniques, or long sequences, or anything flash, I am quite sure they went away not wanting to be on the wrong end of an elbow strike!

It was good to train in the other styles and interesting to see some familiar techniques and consider the philosophies behind them.

We have learned some new moves and training sequences which we shall borrow and bring into our training at the club following one of our basic principle of efficacy – if it works and is simple we will use it.

There were a few approaches that were completely opposed to ours so, whilst it is interesting to consider them, we are happy with our core philosphy so we will just ignore that.

It was also good to raise some money for charity too.