Karate is clearly a martial art being one of a number of philosophies of self defence or single combat. Martial arts are often thought of as originating in the Far East but the term was used in Europe long before the Far Eastern styles were known to us in the West. The term is derived from Latin, and means ‘arts of Mars’, the Roman god of War.

Art is creative and covers all manner of forms including dance which is of specific relevance to us. Dance is a performing art form consisting of purposefully selected sequences of human movement. This movement has aesthetic and symbolic value.

You’re probably wondering where I am going with this. Stick with me a little bit longer and it will all become clear.

If you’re lucky enough to be standing at the front of the class when there is a good mixture of students training you may be able to see students approaching their techniques in two broadly different ways.

You would see some students taking a very martial approach to their training. They are easy to spot as they will be straining everything they have to perform their techniques with as much power and speed as they can muster. To them how technically correct a technique looks is secondary to how effective it is. Their techniques are often rough around the edges and they are often rather red and perspiring heavily.

You would also see that other students take a more artistic approach to training. They don’t tend to strain themselves as physically as the other type of student but it is very clear from the look on their faces that they are concentrating incredibly hard to remember every nuance of the technique they are performing and then to do it exactly correctly. I know from personal experience that concentrating hard for a prolonged period of time can be very tiring too. Their techniques aren’t often as strong or fast as others but they do look great.

As with many things in life there is a scale between the two types of approach with students sometimes very clearly favouring one or other approach and others somewhere in between.

In order to improve at karate we should all consider where we might find ourselves on the scale and, having done so, perhaps try to shift ourselves towards the middle.

That can be quite easy to do when we practise katas. If you have a martial approach why don’t you just slow everything down and concentrate on the stances, hip work and techniques? You’ll probably find that to be quite hard as your mind will struggle with trying to concentrate on so many things.

If you have a more artistic approach to training try to race through the kata imagining attackers coming at you in a rush – you don’t have time to do a beautiful technique as a rough and ready one will have to do. You’ll probably end the kata breathing heavily and thinking you’ve just performed a sloppy mess. It will improve your karate though so please give it a few goes.

Please have a think about your training approach and give the other one a go. 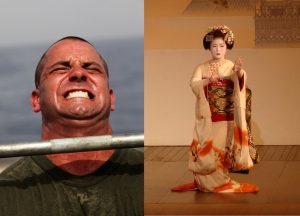