What do a gyaku tsuki and Usain Bolt have in common? 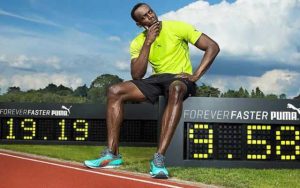 The title of this article is probably not a question you have ever asked yourself. Hopefully I will explain this below.

Towards the end of last year I discussed the basic forward stance with some senior grades at the club with a specific emphasis on the the pulled back hand. Just as a reminder, it sits just above your hip, with the hip pulled back and your arm bent at the elbow which is pulled back too.

To my mind that seems an awfully long way back from your opponent and has historically not coordinated well with the hip work we are obsessed with, leading to nearly all beginners, and a fair few senior grades, sticking their elbows out when punching. The timing of the movements within the technique often get messed up as does our body shape and the punch is weak.

I wondered whether we should move the starting position of the hand further forward with the elbow being tucked in at the side? This would lead to a faster punch, more specifically punching your opponent more quickly, and also to stop the elbow from sticking out. We could also open the hand to improve relaxation.

With those two points in mind it makes perfect sense to change things.

However, where do you stop? We could push the hand further forward making the technique even quicker.

Nothing was decided and it was left that we would think about. I’m not sure if anybody has thought about it other than me.

What I now realise is that I was not considering the issue from a Shukokai Karate position. I was trying to help students avoid pitfalls in the technique when I should have kept pushing them to get things right. Shukokai Karate, and its Ikken Hissatsu philosophy means that we should be doing everything we can to deliver as much power in the technique as we can.

Power in a technique comes from mass and speed and therefore the faster we can get our fist to go when it hits something the more powerful the technique.

We now go back to the question at the top of the article. The answer to it is that they both take time to get up to maximum speed.

Bolt’s fastest 100 metres took him 9.58 seconds. He gets up to 27.28 miles per hour at 70 metres before easing down and enjoying his victory. However, after 10 metres he is only going 11.84 miles per hour and 22.60 miles per hour at 20 metres. He continues to get faster until he reaches top speed after about 7 seconds.

Therefore, if we move the starting position of punching hand forward we will most likely limit its speed at the point it lands, reducing its power and effectiveness.

With that in mind we should leave our stance alone and appreciate the ancient wisdom behind the fundamentals of our martial art.