Efficacy? What does that mean?

Efficacy is defined as the ability to produce a desired or intended result (or, to borrow a catchphrase, “It does exactly what it says on the tin.”).

Applied to what we are doing when practicing a martial art that means keeping us safe. Keeping yourself safe involves two things:

Avoiding injury from any attacks that an opponent may throw at you; and
Ensuring your opponent stops trying to attack you.

At this point we come back to our philosphy of, always move, most likely block the attack and then counter attack. There is of course more to it than that and there are two more things that need to be considered:

They are not the same thing.

It should be fairly obvious that if you select to do the wrong technique, for example, if you duck to your left when your oppenent tries a right legged round house kick, you are going to end up in trouble. Likewise, if you counter punch someone to the top of their forehead you’re likely to break your hand. That would be the wrong technique.

If you’re going to punch somebody you would have a good chance of stopping them if you were to punch them in the solar plexus. However, if you punch with a bent wrist you could end up with a broken wrist. That would be doing the technique wrong.

Efficacy is not something that can be judged. Something either works or it does not. Therefore practicing in a line, or going up and down the hall, will not ensure that when the time comes your karate will save you. You only know that your techniques will work by practicing them against a committed attack from your training partner. This is why our training includes so much partner work and pad work. This isn’t the case at all Karate clubs but is second nature for other martial arts like jiu jitsu or aikido.

The partner work helps us to practice moving and blocking. If your training partner attacks with an appropriate amount of speed and commitment and you manage to avoid their attack you know your defence has worked. Alternatively if you got hit, you need to train harder perhaps by concentrating and therefore reacting faster?

The pad work helps us to know if our techniques are delivering enough power to stop our opponent. Whilst there is still some judgement involved, if your partner has to take a step back when your kick lands you both know it’s a powerful one. You both also know when the technique hasn’t been up to scratch if the pad holder hasn’t moved or even flinched.

We have Sensei Terry Wingrove to thank for emphasising the importance of efficacy in our training. He made his point well and a number of us had the bruises as evidence that his techniques certainly worked. Despite the hard lessons he dished out we attended a number of his seminars so we obviously thought he was teaching us the right way to practice our karate.

Hopefully you now know what Sensei Ziggy is talking about when he refers to efficacy and understand what that really means. 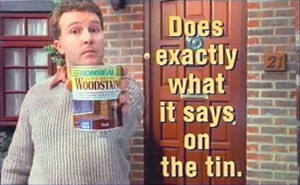