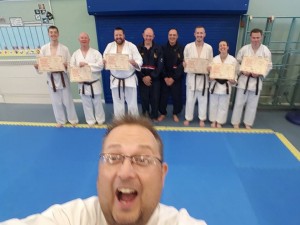 On 11 September 2016 four students gained their first Dans and are now proudly sporting a new black belt. Congratulations go to Ian Perry, Steve Penman, James Long and Morgan Long for this notable achievement. Each of them have trained hard over the past six or so years, pushing themselves to the limit and sometimes beyond, to reach a target that only few people attain.

They impressed the judges from Sheffield with their skills, knowledge and determination and all deserved to pass on the day. They also showed an appropriate level of competitiveness from the very start, racing each other in the sequences, trying to blast each other off the mat in the pad work, demonstrating efficacy in the partner work (especially when attacked by me) and finally in the sparring (especially where father and son were concerned).

Well done to them all. They can now take a little time to enjoy their new status and be proud of themselves.

At the same time the four students were straining everything to become a black belt Louisa Annison was showing off her own advanced skills to the judges as she took her second Dan grading. Unlike almost everyone else in the club she manages to do karate with relaxation and calmness, effortlessly keeping pace with the guys, whilst adding a little grace to proceedings. Despite her nerves the grading was no different where she set a very high benchmark for all, especially so in the katas.

Louisa achieved her second Dan with flying colours. A great achievement and a reflection of her dedication and determination over many years. It can’t have been easy for her to keep training and pushing herself all this while especially so when so many of her training partners are much larger than her. It’s easy for us bigger people not to appreciate how hard things can be when you’re not quite so big, especially when doing martial arts. Louisa also deserves a great deal of respect for attempting the grading as when she took her first Dan she ended up with some cracked ribs for her troubles! A very big well done to Louisa.

Unfortunately Sensei ‘Ziggy’ Seabrook was unable to attempt the grading due to a long list of injuries and ailments. His current grade belies his great depth of knowledge of karate and martial arts, the power in his techniques and his ability to ‘adapt and overcome’ in any one on one partner work and situation. None of our achievements would be possible without his dedication and teaching and everyone owes him their gratitude. Well done Sensei. Your students have done you proud and through them you can take great pride in yourself and the club you have fostered over the past seven years.

The other club Sensei, Stacy Tovell (me), joined the other senior grades on the grading and achieved his fourth Dan. I mention that for completeness. Thank you to all the students and Senseis over the past 27 years who I have trained with, without whom none of the above would be possible.